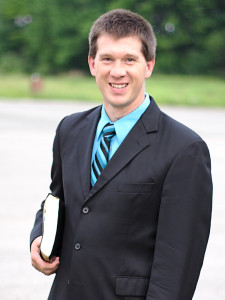 Pastor Bret Smith was born in Batavia, New York in 1970. He became a “preacher’s kid” in 1977 when his father began pastoring in Upper Lisle, New York. Pastor Smith met his wife, Debbie, at Bible college, and they were married in April of 1992. Debbie is originally from Cleveland, Ohio; but as a daughter of missionaries, she spent part of her life in Japan and Colorado.

Pastor Smith graduated from Baptist Bible College, Clarks Summit, Pennsylvania in May 1994. He began pastoring in a small town in northeastern New York State called Brant Lake in 1995. His ministry at the Mayfield Village Baptist Church began in June of 2002. Pastor and Debbie have five children: Jordan, Michael, Sydney, Kacie, and Emily. They enjoy fellowshipping with others, playing soccer, biking, and spending time outdoors.