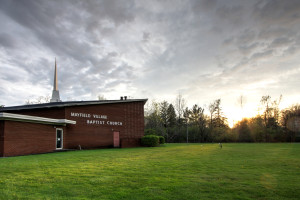 Our church has a history of over 95 years of ministering the Word. Mayfield Village Baptist Church was founded in 1919, when the city of East Cleveland was only eight years old. The church was first started as a missionary endeavor of the former Cedar Avenue Gospel Church. In its humble beginning in April of 1919, its meeting place was the potting shed of Andicott’s Greenhouse on the corner of Scioto and Hayden Avenues. When the space in the greenhouse became inadequate, the congregation purchased the old St. James Lutheran building and had it moved to 1656 Hayden Avenue. On August 4, 1922, the church was incorporated as the Hayden Avenue Gospel Church. Some thirty-one years later on April 17, 1953, the congregation voted to change the name of the church to Hayden Avenue Baptist Church.

Due to the blessing of continued growth, the church built a new building to satisfy the need for more space. The building was finished in 1959. By the Fall of 1965 the new facilities were filled and overflowing. Since additional facilities were not able to be built in the Hayden area, a branch church was incorporated in 1965 under the name of Willo-Hayden Baptist Church.

More growth ensued and in 1970 the Hayden church purchased land on Highland Road in Mayfield Village with intent to build. It was at this time that the name of the church was changed to Highland Road Baptist Church. The first Sunday in the new facilities was December 5th, 1971.

It was late in the year of 1992 that the church voted to change the name. On January 1, 1993, the church officially became known as the Mayfield Village Baptist Church.